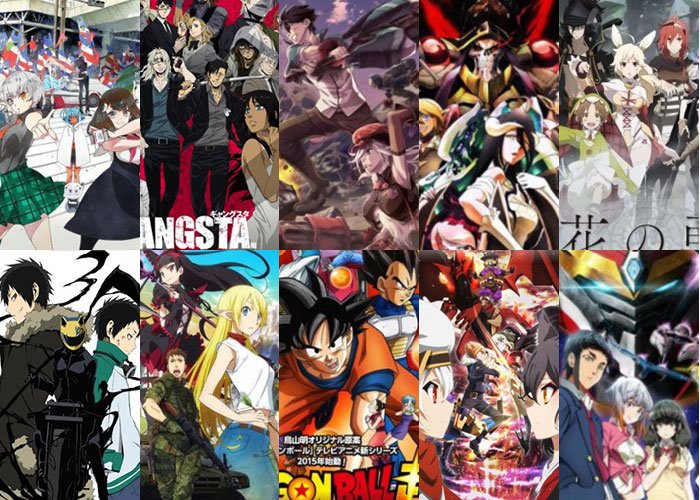 Gate – Interesting plot. Who doesn’t like 3 types of girls in another world.

Classroom Crisis – Interesting plot. Someone is working on taking a company CEO spot. And you have a group of people burning company money.

Charlotte – Special powers for different people. Tho the guy with the speed is crazy.

Rokka: Braves of the Six Flowers – Its starting to get good. Still don’t know who is this demon they supposed to kill.

Sky Wizards Academy – Teaching girls how to fight beetles. But first learn how to work together.

Overlord – Another anime about someone being stuck in a video game. Cool. Life sucks lol.

Monster Musume: Everyday Life with Monster Girls – a Snake, A Harpy which is a bird brain, and a half horse and half human. It’s getting crazy as it goes.

Dragon Ball Super – Starting after the Majin Buu Saga and before the DBZ Movie Battle of the Gods. I just want to see Goku get stronger lol.

Aquarion Logos – Because I watch the other version of this anime already.

There are a few continuing animes like Naruto, One Piece, Durarara!!, World Trigger, Denpa Kyoushi.

There are some animes on a pending list. I just haven’t gotten the time to sit and watch alot of it due to me getting home so late hanging out. Trying to play catch up this weekend.
Those animes are:

SHIMONETA: A Boring World Where the Concept of ‘Dirty Jokes’ Doesn’t Exist – like in the translated title. It mostly about Dirty Jokes.

Snow White with the Red Hair – Only seem the first episode so far.

If you have access to my plex server you can see all the episodes I have up till today.